The Minorca Giant Rabbit (Nuralagus rex) lived on the island of Minorca off the coast of Spain during the Pliocene. Among other unique characteristics, this species holds the record as the largest lagomorph yet discovered. It was also the only lagomorph to become the largest mammalian herbivore of its environment.

Etymology
The Minorca Giant Rabbit was described in 2011 and is known from abundant skeletal remains. Nura is the ancient Phoenician name for the island of Minorca, and lagos is the Greek word for hare or rabbit. Its species name rex is the Latin word for king, which is a reference to this species great size compared to other lagomorphs. “The King Rabbit of Minorca”. For the purposes of this blog I will be referring to this species as the “Minorca Giant Rabbit” or simply “Minorca Rabbit”.

Habitat & Distribution
Thought to have descended from mainland European rabbits of the genus Alilepus, Minorca Rabbits were, as their name suggests, endemic to the small island of Minorca in the Mediterranean Sea off the coast of Spain. Evolving on a small island which lacked large predators or large-bodied competing herbivores allowed these rabbits to rapidly grow in size and become the largest herbivores in their habitat. The species is known from Pliocene deposits and is thought to have become extinct by the early Pleistocene. Physical Attributes
Minorca Rabbits differed in numerous ways to modern rabbits, the most obvious difference being its great size. It stood about 50cm high at the shoulder and had an estimated average body mass of 12kg (27lbs), making it more than 10 times heavier than the largest modern rabbits and over 2 times heavier than the largest hares. The modern Amami Rabbit (Pentalagus furnessi) from Japan shares many physical traits with its extinct cousin, albeit to a lesser degree. Most notably, the cursorial adaptations possessed by their mainland relatives have been lost. The hindlimbs were shorter and more robust with broad, plantigrade feet: modern rabbits have long hindlimbs with narrow, shock-absorbing feet. The vertebral column of the Minorca Rabbit was also shorter and less flexible which would further reduce its stride length. When it needed to move quickly it would do so in more of a loping conventional gait probably similar to that of a large mustelid rather than utilizing the hopping gait employed by other rabbits. Furthermore, the body was bulky and the volume of the ribcage shows that the heart and lungs were proportionally small: in cursorial mammals, the ribcage is typically expanded and these organs are often enlarged to maximize circulation and airflow during a run. The skull, eyes, and ears are all notably smaller in proportion to the rest of the body than it is in modern rabbits, suggesting that vision and hearing was somewhat reduced; this is not a severe handicap in an environment which lacks large predators. Large, curved claws and robust forearm bones indicate that Minorca Rabbits were particularly skilled at digging. 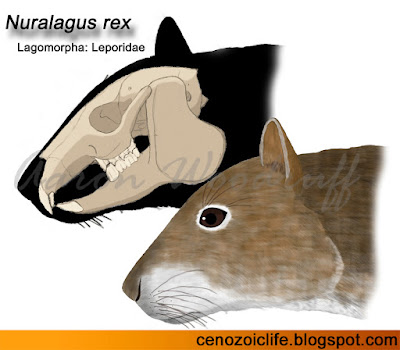 Ecology & Behavior
Like many modern rabbits and hares, Minorca Rabbits likely inhabited extensive burrow systems, excavated by their well-developed claws and forelimbs. These fossorial attributes were also potentially used to dig for plant roots and other underground food resources. Although it is unknown what plants it habitually preferred, this species was most likely a mixed-feeder that grazed and browsed on most of the plants within all habitats on the island. Minorca Rabbits had no known terrestrial predators, although juveniles were potentially at risk from predatory birds.

Posted by Life in the Cenozoic Ea at 5:06 PM