The South Island Giant Moa (Dinornis robustus) was the largest of all known moa species and the tallest bird yet discovered. It inhabited South Island, New Zealand during the Quaternary.

Etymology
In reference to its great size, the name Dinornis is derived from the Geek words deinos, meaning “prodigious” or “terrible”, and ornis, meaning bird. Its common name denotes South Island, New Zealand to which this bird was endemic. Another species, D. struthoides, which was described based on its similar morphology but much smaller size, is now known to have been the male morph of D. robustus as of 2003.

Habitat & Distribution
South Island Giant Moa had a relatively broad range of habitat preferences, occurring in nearly all vegetated habitats on South Island. Widespread and abundant, the population of this species has been estimated to have been around 479,000 individuals prior to the arrival of human settlers.

Physical Attributes
The South Island Giant Moa stands out as the largest of all the moa and the tallest bird known to have ever lived. Fully grown females stood up to 2m tall at the hips, up to 3.6m when the neck was held fully erect, and weighed a maximum of 250kg (550lbs). Among recently extinct birds, only the Elephant Bird (Aepyornis maximus) of Madagascar was more massive, albeit not as tall. Adult male South Island Giant Moa were considerably smaller, at up to two-thirds the height and one-third the weight of the females. This species had a stilt-legged, rangy skeleton which would have made it very agile despite its great size. It differs from the North Island Giant Moa (Dinornis novaezelandiae) in its larger size, having a relatively shorter, stronger neck, and its deeper, less downcurved beak. Preserved soft tissue remains are known from this species, including an intact foot complete with dried skin, ligaments, and muscles adhering to the bones. Known plumage shows that most of its body except for its lower legs was covered in long, reddish-brown hair-like feathers up to 18cm in length. 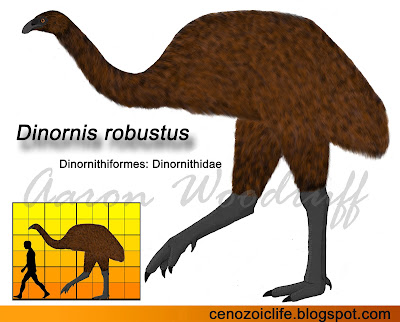 Ecology & Behavior
Evidence from coprolites and gizzard contents shows that the South Island Giant Moa was a mixed feeder which grazed and browsed on various trees, shrubs, herbs, and grasses within its environment. Their great height further enabled them to feed on vegetation which other moa could not reach, thus minimizing competition for available food taxa. Biomechanical studies have shown that South Island Giant Moa fed by performing a lateral shaking motion of its head when browsing. Aided by an exceptionally broad head and beak, this behavior enabled them to break twigs and branches of considerable width. Furthermore, evidence suggests that a strong sex-related niche stratification existed within this species. Females appear to have browsed within forested environments where they subsisted on lower-quality, fibrous plant matter while males were more likely to feed on herbfields and forest clearings.

Large, white eggs measuring 240x178mm and weighing an estimated 4kg when fresh have been attributed to this South Island Giant Moa. Females laid 1 to 2 eggs in shallow nests constructed by males who would take on sole incubation duties for at least 2 months. Like modern birds which demonstrate high degrees of female-biased sexual dimorphism, females are likely to have mated with multiple males within their home range and would have competed aggressively with each other over nests. Chicks were likely precocial and able to forage on their own soon after hatching and attained their adult size within just 3 years after hatching.

South Island Giant Moa were heavily exploited by the Maori and became extinct in as little as 100 years after their arrival. Their bones are widespread in Maori middens and comprise a disproportionately large number of males and eggs: the opposite of what seems to have been the case in a natural setting where it seems that adult females were more numerous than males at a given locality. The reason for the large number of male birds and eggs found at archaeological sites may indicate that the Maori chose to collect male birds while they were tending to their nests and were relatively sedentary. This strategy may have been easier than hunting the larger and potentially more aggressive females, but in doing so the Maori would have further reduced the already limited number of breeding males and cut the number of moa which would have survived to maturity. This would have resulted in catastrophic population declines from which the slow-breeding birds could not recover.

Posted by Life in the Cenozoic Ea at 2:00 AM