The Red Panda (Ailurus fulgens) is the sole surviving representative of a family of small to medium-sized carnivorans* known as the Ailuridae, more commonly referred to as lesser pandas.
Etymology
The scientific name for the Red Panda translates literally into "Fire Cat", referencing its reddish-colored fur which also inspires its common name. Ailurus is derived from the Greek word ailuros, meaning “cat”, and fulgens comes from the Latin word fulgeo, which can mean “firey” or “flashy”. The word "panda" is derived from a Nepalese term nigalya poonya, which means "eater of bamboo". It is also referred commonly as “Red Cat-bear” or “Lesser Panda”.

When French zoologist Frédéric Georges Cuvier described the Red Panda in 1825, he thought the animal was a type of raccoon, and so placed it in the Procyonidae. In 1843, British zoologist John Edward Gray placed this species in its own family (Ailuridae) based on differences in its physiology and behavior. It was once even considered to belong to a new and now rejected family Ailuropodidae together with the Panda Bear (Ailuropoda melanoleuca) which has since been recognized as a true member of the Ursidae. Subsequent paleontological discoveries have since confirmed the Red Panda’s place in its own distinct family. Recent DNA analysis has backed this up even further.

Habitat & Distribution
It is unclear when the genus Ailurus originated, but it may have descended from the extinct genus Parailurus in central Asia sometime during the Pliocene. Other members of Ailuridae became extinct, possibly due to the drastic changes in habitat and climate that occurred toward the end of the Pliocene and continued throughout the Pleistocene. The Red Panda has persisted because it is a specialist, adapted to the temperate high-altitude forests of the Himalayas where it feeds almost exclusively on bamboo.

Physical Attributes
The Red Panda’s coat is thick, soft, and double-layered, adapted to insulate it in the cold, mountainous environment in which it lives. Its upperparts are reddish or reddish-brown in color and it limbs and underparts are black. The tail is ringed and the face has distinctive white markings. 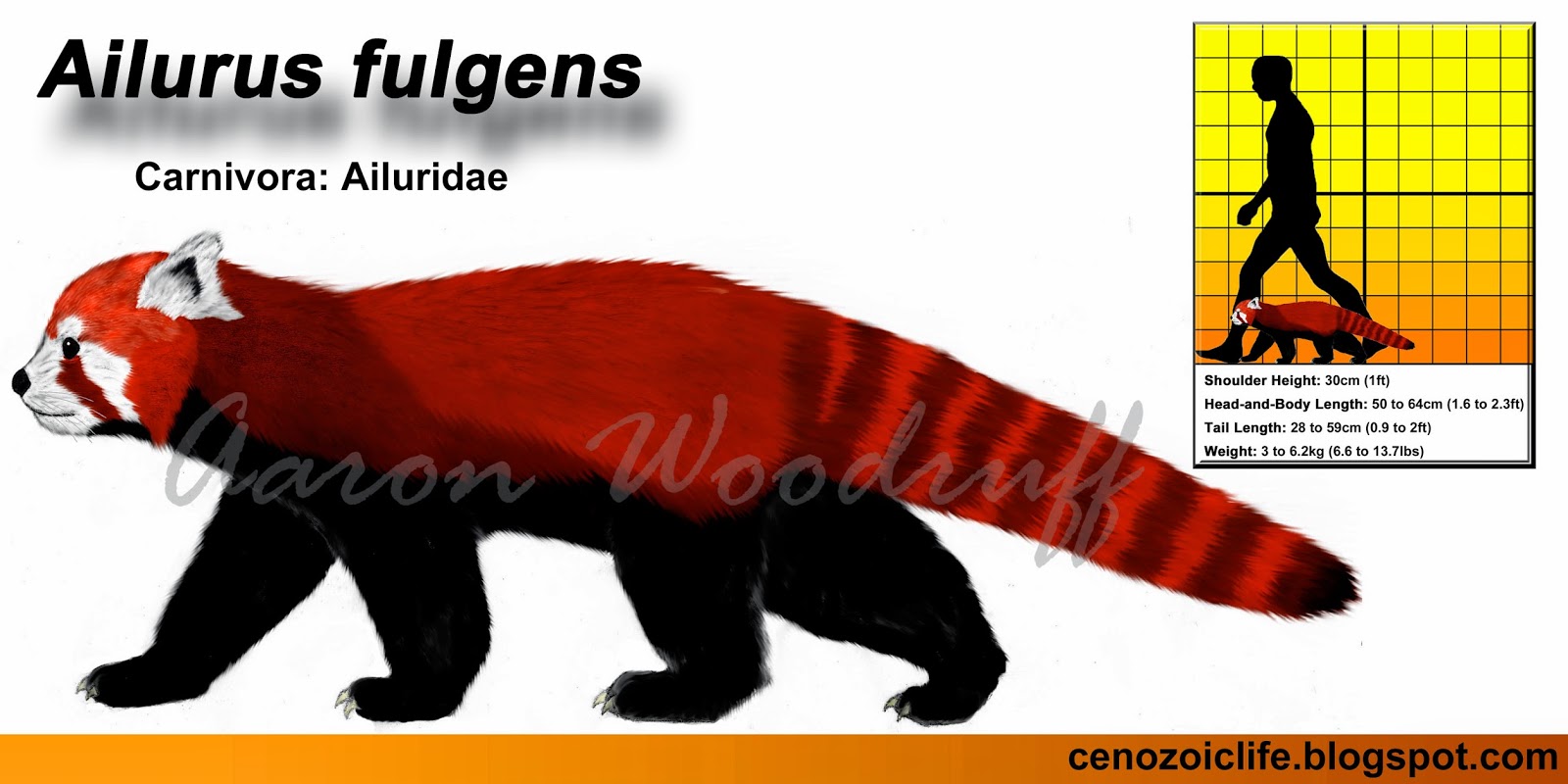 The Red Panda is highly arboreal and demonstrates a number of anatomical characteristics that make it highly adept at climbing trees. The tail is long and used as a counterbalancing aid. Broad paws with recurved semi-retractable claws provide a powerful grip and rough paw pads enhance traction. The body is nimble with powerful muscles in the forelimbs and lower back which they use to swiftly propel themselves up vertical surfaces. Another valuable climbing tool is the radial sesamoid bone or “false thumb”. This modified wrist bone is mobile and able to oppose the first digits of the forepaw, creating an effective pincer-action ideal for clamping on to tree trunks and thin branches. This adaptation can also be used to grip and manipulate food items.
Red Pandas belong to a subfamily within the Ailuridae known as the Ailurinae. Members of this group display a general trend toward hypocarnivory* which is reflected by the broadening of their carnassials* and posterior premolars with the addition of grinding cusps. These changes were particularly evident in the ancestral Parailurus and further emphasized in the modern species. As noted above, the Red Panda specializes in eating bamboo. Bamboo is an extremely tough plant with a low nutritional value, and so the Red Panda has had to undergo several cranial and dental modifications to get the most out of this poor diet. The skull has become broader and more domed compared to other ailurines with a pronounced sagittal crest. The premolars have become fully molariform* to expand the grinding surface. The carnassials have completely lost their shearing function, are much wider than they are long, and have developed multiple enlarged cusps. Endowed with an immensely powerful bite for its size and efficient grinding teeth, Red Pandas are able to consume large quantities of bamboo per day. 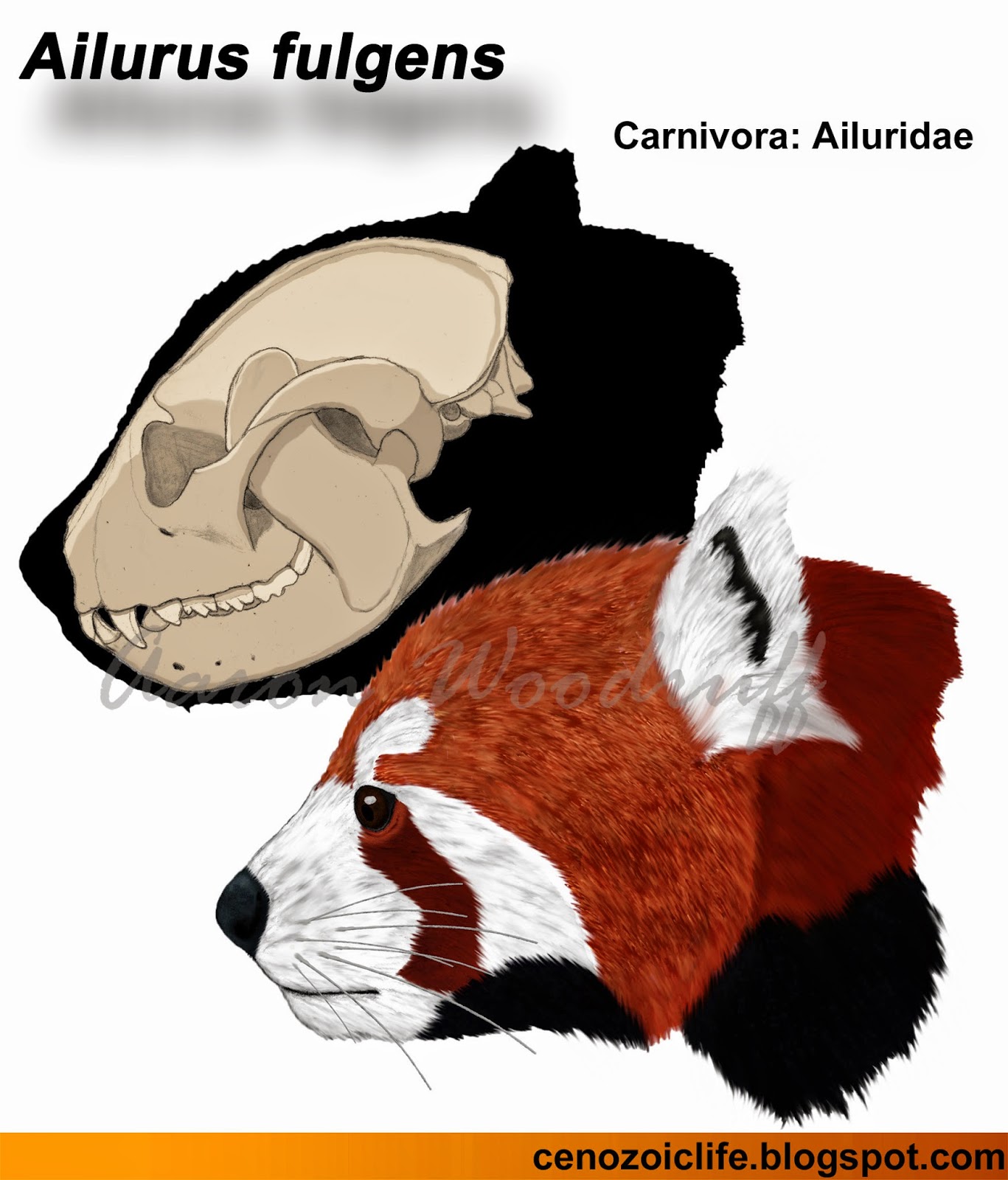 Ecology & Behavior
Although the Red Panda feeds almost exclusively on bamboo, it will occasionally feed on the flowers, leaves, fruits, and bark of other trees while opportunistically catching small animals as encountered. Its huge paws make it very ungainly on the ground, and so most of this species’ feeding and movement takes place in the trees and it is rather ungainly on the ground.
Because of its dense coat, Red Pandas are very heat-sensitive and find temperatures of over 25°C (77°F) intolerable. They escape the heat by being nocturnal or crepuscular* in their general habits and spend the hotter parts of the day sleeping in the shaded canopy. Red Pandas are very fastidious, grooming themselves thoroughly and regularly. Territories are defended against members of the same sex and marked are with urine and anal gland secretions. Breeding may occur from mid-January to early-March with young being born 112 to 158 days later inside a tree hollow.
The Red Panda is currently threatened by habitat loss throughout its range due to timber extraction, agriculture, and development. It has also been exploited for its lustrous, double-layered pelt which evolved to keep it warm in the mountainous forests in which it lives. It is now protected in all the countries in which it resides with the exception of Myanmar. An international breeding program has also been established, and it is now bred in more than 30 zoos around the world. Ultimately, the protection of this species depends on the continued protection of its remaining habitat.

Glossary*
Carnassial: specialized shearing cheek teeth found in terrestrial mammalian predators.
Carnivoran: any member of the mammalian order Carnivora (cats, dogs, bears, hyenas, etc).
Crepuscular: active during the early morning and late afternoon.
Hypocarnivore: an animal whose diet consists of less than 30% animal matter.
Molariform: the condition in which non-molar teeth take on the form and function of true molars.