Bristol’s Panda (Pristinailurus bristoli) is an ancient North American relative of the living Red Panda (Ailurus fulgens) from the late Miocene. Known from nearly complete skeletons, it is the most complete fossil ailurid yet discovered. 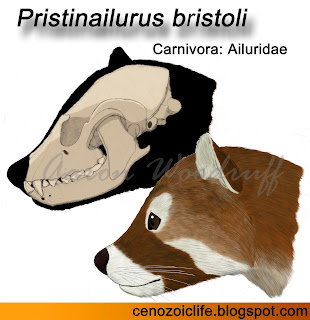 Etymology
Its genus name Pristinailurus comes from the Latin word pristinus meaning “former” or “previous”, and Ailurus for the extant Red Panda to which this species is closely related. The species is named for Larry Bristol who discovered the holotype*. Commonly, this species is also known as “Bristol’s Appalachian Panda”. The word “panda” itself is derived from the Nepalese term nigalya poonya, which means “bamboo-eater”, a reference to the diets of the living Red Panda and the unrelated Panda Bear (Ailuropoda melanoleuca).

Habitat & Distribution
Bristol’s Panda is special because it is one of only two ailurine pandas known from North America, the other being and unnamed Parailurus species from Washington State known only from a single tooth. Although the living distribution of Bristol’s Panda was undoubtedly more expansive, its fossils are known only from the late Miocene-early Pliocene locality of Gray, Tennessee. The environment in which it lived was a forested region with a subtropical climate as evidenced by the alligator and other fossils unearthed there. 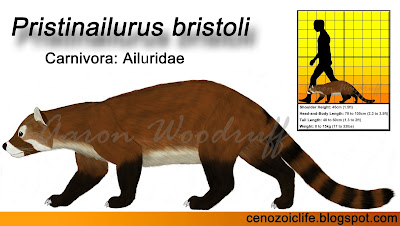 Physical Attributes
Bristol’s Panda differs from the Red Panda in a number of ways, the most obvious being its much larger size. The fossil panda would have weighed 8 to 15kg (17 to 33lbs) in life, compared to the Red Panda which averages 5kg (11lbs). The skull of Bristol’s Panda is not as domed and it lacks a sagittal crest suggesting a weaker bite. However, its rostrum was longer with larger incisors and canines. The upper carnassial is also longer and less molariform*, suggesting that it was not as dependent on plant matter as part of its diet.
Bristol’s Panda shares several physical characteristics with the modern Red Panda which point to climbing ability including a long tail for counterbalance, broad paws with recurved semi-retractable claws, and a nimble body with powerful muscles in the forelimbs and lower back. There are, however, some major differences between the two species. Several aspects of Bristol’s Panda’s anatomy hint at a more terrestrial existence than its living relative. Compared to the highly arboreal Red Panda, Bristol’s Panda has proportionally shorter and more robust forelimbs and significantly longer hindlimbs. This body plan is typical of carnivorans* such as civets, small cats, and certain foxes that actively hunt on the ground while retaining considerable climbing ability.
We see further evidence of a terrestrial lifestyle in Bristol’s Panda can be seen in the proportions of its radial sesamoid*, a bone which is found in all ailurids and in some ursids. Also known as false “false thumb" or "pandas thumb”, this bone has become mobile and able to oppose the first digits of the forepaw creating an effective clamping action. The false thumbs are particularly well-developed in the Red Panda which frequently uses them to grip tree trunks and thin branches. The false thumbs of Bristol’s Panda are proportionally much smaller, suggesting less frequent usage and overall less time spent in the higher branches of trees.

Ecology & Behavior
The body proportions of Bristol’s Panda were those of an active and agile predator that spent most of its time on the ground but could readily ascend trees when necessary. Like many small forest-dwelling carnivorans it was probably nocturnal and solitary, perhaps sleeping in burrows during the day and emerging at night to forage. Together with the Woodland Badger (Arctomeles dimolodontus), Bristol’s Panda is the most commonly found small carnivoran found at the Gray Fossil Site. This suggests that these animals had a relatively high population density, which is typical of small mammals with versatile diets. For Bristol’s Panda, the menu would have included various small vertebrates and fruits, as well as eggs and invertebrates, all of which are typically abundant in forested habitats. With food sources available all year round, Bristol’s Panda may have required relatively small territories.

Bristol's Panda appears to exhibit marked sexual dimorphism* with adult males potentially weighing up to twice as much as the females. This size variation is much more extreme than that observed in the modern Red Panda. Among modern carnivorans, high dimorphism generally occurs for one two main reasons, both having to do with intraspecific* competition. (1) Territoriality among mature males. Among highly territorial animals, males tend to be noticeably larger and more robust because they must more actively defend a territory and its resources, including any females that may live within it. Larger body size is therefore advantageous for such male-on-male confrontations. (2) Resource partitioning among males and females. Most prominent among the more solitary species, males and females living in the same environment must share the same resources. Having strongly dimorphic sexes limits competition between the sexes in that the two morphs tend to focus on slightly different food items and in different quantities. For example, the larger male will tend to select somewhat larger prey, while the female may generally focus on smaller prey. We may therefore speculate that Bristol's Panda engaged in similar social patterns, being a relatively solitary predator and forager which would actively defend feeding territories against unrelated members of the same sex.

Glossary*
Carnivoran: any member of the mammalian order Carnivora (cats, dogs, bears, hyenas, etc)
Holotype: a single physical representation of an organism that was used to formally describe it.
Intraspecific: referring to members of the same species.
Molariform: the condition in which non-molar teeth take on the form and function of true molars.
Sexual dimorphism: differences in appearance between males and females of a given species.